It was quite sad getting up on the last day, knowing we were leaving and would probably never see Chaira, Mendel or Flash again. They’d been part of our lives for such a short time but had touched us and it will be a long time before either of us will forget. Although I think Efan will remember the cat for longest.

We had a lie in and left ourselves plenty of time to get to the station and have something to eat before we got on the train. Everything went smoothly, maybe a little too smoothly for me, until we’d gone through the barriers at the station and realized all the restaurants, cafes and shops were on the other side. With more than three hours to kill, we had nothing but a muffin between us, and I was way too thirsty to eat the muffin.

That was an… interesting couple of hours in the blazing heat on a plastic seat, watching trains and people come and go.

Finally. finally, our train arrived. Thank goodness it comes in fifteen minutes before leaving time. We had plenty of time to find our seats and store our stuff. I actually think, that after all the dehydration I’d shrunk just enough to fit into the seat a bit better.

When we started moving, I send Efan foraging. When he came back, he wasn’t impressed. Apparently, despite the train announcement that the dining car had hot food, and all the notices that said there was hot and cold food available when he got to the counter it was to discover there was no food. He came back with a coffee, two bottles of water and a packet of popcorn. Not the best forager ever.

The journey went well, and yes, it seemed much quicker on the way back.

When we arrived in Brussels, we had 50 minutes to change trains. I foolishly thought we had enough time for a pee, so I trotted along, confident in my knowledge on how to work a Dutch toilet. I even taught a confused American lady how to work it, and it was the best 60c pee I have ever had. On the way out, I found the American lady explaining to more confused peers and it gave me a warm glow to know my wisdom was already cascading.

We got utterly confused looking for the platform until a helpful shopkeeper (actually he was grumpy git who seemed to think we were mentally retarded – ok he could have been right there) pointed out it was on the other side of the station.

I have not run for years, but this was the closest I’ve come in a very long time. It was such a long way and I was in tremendous pain when we got there, not to mention working myself up into a meltdown. 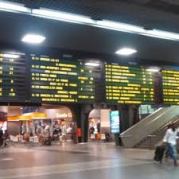 The line for security and passport control was enormous. We joined the end and meandered through the maze. I was okay until time started to get precious. The line didn’t seem to be moving much.

I was relieved when we got to security with still ten minutes to spare. The line split into four which ultimately resulted in us ending near the end of the line instead of near the middle where we’d started. This was partly to do with the fact we were pulled aside by security and had to empty our cases. Whatever the issue was turned out to be Efan’s Nintendo Switch.

By the time we were through security, I was having an anxiety attack and doing everything I could to distract myself. Breathing exercises, rocking, tapping, biting my nails. Efan was surprisingly calm which is good because I really don’t know what would have happened if he’d started to panic too.

Once through security, the line for passport control was even longer. It turned out there was only one booth open. In the end, they opened the business class line, just to get through passport control.

I thought the passport checker was going to haul me off for being a suspicious character because, by the time I got to her, I was frantic and crying. However, things went smoothly, although there was a hitch when I went through and there was a bit of confusion when he waited to come behind me rather than going to the next stall and the guard thought he was trying to get through with me and not show his passport. (it’s a weird machine where you put the passport in and see yourself on a camera then the gate opens)

By this time we were ten minutes past the time when the train was due to leave. There were rumours flying from “they’re holding the train” to “we’ll be put on the next one” to “we’re stuck here unless we buy another ticket.”

I was freaking out. When we finally got through we were motioned toward stairs to the platform. Thankfully as EU citizens (for now) we went through the faster lines for customs etc, and were finally on the platform. The train was there, but the guards were waving and I continued to have the biggest anxiety attack I have ever had.

We were in carriage ten. The carriage next to us was twelve. I looked in one direction and there seemed to be only one carriage, so I figured it would be the other way. I called out to Efan with the result he stopped and I then proceeded to trip over the corner of the case and fall. Fortunately, I managed to take a few quick steps before my body finally succumbed to gravity and crashed down, landing on my knee and him. If I’d fallen from standing with my whole 22 stone coming down on my knee, I think I would have ended up in hospital. 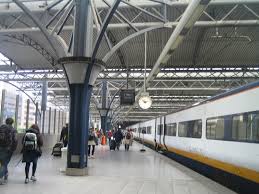 As it was the pain was indescribable, not only in my hip and knee but in my back, which is not good at the best of times.

Generally speaking, if I’m on the floor, the only way I can get up is by crawling up the furniture. Even then it’s touch and go. When my back is in spasm it’s a drawn-out ordeal. I could not afford that here. In a blind panic, I somehow managed, with Efan’s help, and a post like one of those in the picture above, to get upright. The only possible upside was that I probably made a pretty good show for the people looking out of the windows – a grey-haired, fat lady going arse over tit then trying all ways to get up while clutching a sheaf of papers and yelling “we’ve got to get on the train” over and over. It was a shit experience for me but it would be nice to think it helped someone else’s journey to start off a bit happier because we were ALL stressed.

It didn’t help that I was by now utterly convinced this was the wrong train. I sought out a guard and thrust the ticket in her face. She was very concerned about my fall, and probably my mental state. She ushered us onto the train, in carriage thirteen and suggested we walk through the aisles so I wouldn’t have to get off the train and panic about missing it anymore. That was an interesting journey.

I didn’t start calming down until we were sitting in our seats with everything stored, and I could hide my face and crack up. Not that I did because Efan was distressed and I had to be the responsible adult now.

Finally, we got underway. I calmed down and Efan went on another foraging trip – to a dining car with no food, but at least I got a coffee, even though it was shit. 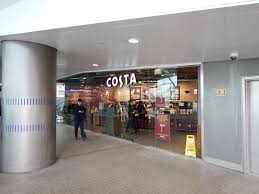 We found a cafe where two lovely ladies directed us to the trains and we stopped for a coffee and calm down. They too must have thought we…okay I…was completely barking mad, because I was stressed and babbling, but they were really lovely and I managed to calm down a lot.

We found the trains without too much trouble, except that I’d made another major boo boo when I’d read 19:00 as 9 o’clock, and we had a four-hour gap between arriving in St Pancreas and departing Paddington.

Anyway, we found somewhere to eat, which was sadly healthy, then located our train easily. We gave our last euros to a homeless boy, which broke my heart because I only had 4 left and no English money.

I could have cried when the train pulled out of the station and we began the last leg of our journey home. While waiting in the rather nice waiting room on Paddington station there’d been an announcement to say there were no reserved seats because the printing machine had broken. As there were hardly anyone on the train (it was 22:45) we had our pick of seats and were very comfortable. As we were also almost alone in the carriage I felt it safe to doze (snoring!) so the journey passed very fast. 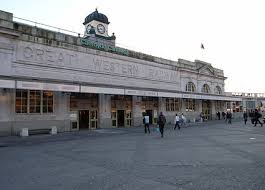 We were lucky at Cardiff station to find a taxi immediately (after taking money out of the cashpoint finally) and were transported back to our car. I could have cried when I set eyes on her.

The driver gave us a bit of an odd look as Efan took the cases out of his boot and loaded them into ours, but he didn’t say anything and almost as he was driving down the street I was safe inside Sarah-Petunia again and finally felt like I was home.

It was a difficult journey thanks to my injured knee, but thankfully uneventful and we made it home in about 40 minutes. After that, it was nothing but dump case, remove clothes, climb into bed and…it’s tomorrow.

I hope you’ve enjoyed taking this journey with us. We’ve got a few trips planned over the summer and I’ll be sure to take plenty of photographs to share.