So, we went on a trip to West Midland Safari Park with an Asperger Support Group. It was…interesting.

We usually go on these trips with our friends Annamarie, Taylor and Isabelle, and this one was no different. Another thing that was no different was my inability to actually get anything done in the mornings. This time I had extra things to do, like making sandwiches and packing a bag so it was bloody chaos.

Financially, things were dire as there had been a mix up with Efan starting college and the tax credits were down to one third. this was unexpected so I hadn’t been able to prepare and we were therefore skint. Usually, when we go on day trips we eat there or at the services. This time, we had to tighten our belts and we packed a bag with goodies – eventually.

Surprisingly, we weren’t late arriving at the bus. We weren’t even that last which was heartening for a good start to the day. The coach was only half filled so we even had a double seat to ourselves which, when you’re both as big as Efan and myself, is bloody lovely.

Finally able to relax, I had a good journey and was well up for it by the time we arrived. There was a bit of faffing about which got the organizer a bit stressed but then the magic moment arrived and we drove through the gates into the safari.

We started on quite a high note, with the rhino’s. It seemed to be a little family group and one of the youngsters was clearly having a beef with Dad. Sadly, I didn’t manage to get a picture of them ramming each other, but they make a pretty handsome family in any event. 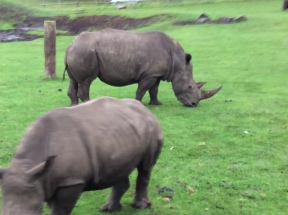 Through a gate, we found ourselves in a crazy situation. Apparently, if in a car, you can obtain animal food in order to feed some of the animals. Oh, imagine what a better world it would be if only you were permitted to feed the tigers. (In other words imagine how much better it would be without the kind of people who would try) Anyway, back to reality. Cars had stopped all over the place – some on the grass, some on the verges, and some diagonally across the road – yes people were that inconsiderate.

Some animals were having a great time, as were their human feeders.

Then there was this guy

He’s the one in the back. Notice the evil eye; the way he’s looking at that car. A short while later, we drove past him and just as we did so, he took a run and slammed full tilt into the side of the car. (It was the car directly behind the one seen in the picture). At the time, a little boy was leaning out of the back window and a tiny little girl, sitting on her father’s lap was pretty much dangling out of the front. I apologize. I was shocked to shit and didn’t think to photograph.

I have no idea if the little boy’s arm was hit. I didn’t hear a wail so I figure he pulled back in time. It must have scared the hell out of him, though. The car was dented to hell with a deep gouge from his horns. And the little girl? I would like to say that father immediately dragged her inside and closed the window, but sadly no. He pushed her even further out in order to be able to lean out and look at the goat himself. Two words. Tiger feeding.

We then embarked on a two and a half hour drive in blazing heat, on a coach filled with autistic children, where the majority of time we were simply queueing with no animals in sight. The children were great, but I was bored to tears. We did get to see some animals though. 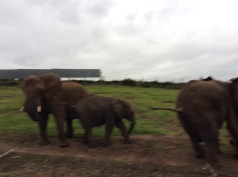 I didn’t like the elephants. They did this kind of dance. I think you can see a little that the one with his back to us is doing it – kind of swaying and kicking his leg out. There was also a moment when I thought they were going to rush at the coach. I don’t know what that was all about. I know animals “dance” through stress and mental illness when kept in captivity but this was a little family and the enclosure was huge. Be that as it may, it made me feel sad and uncomfortable. 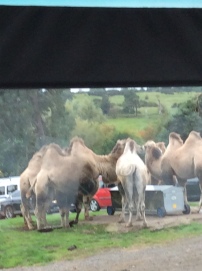 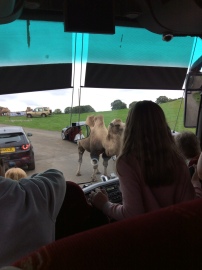 The camels, on the other hand, were hilarious. They were so over us. They made sure we were aware that they were bored with visitors now and if they really had to walk past us let alone look at us, we had pretty well better think ourselves damn lucky. They would just walk slowly in front of you, pause for a while making sure you knew you were going nowhere until they decided you could, then amble off. The ate everything, and I mean everything – grass, camel food, a radio ariel, a hat. 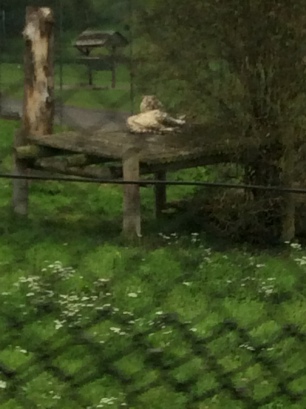 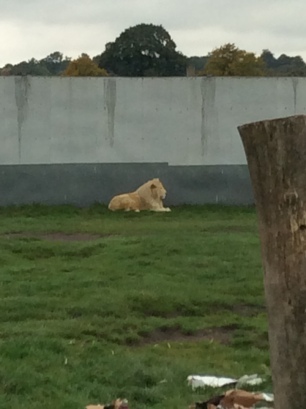 Some of the biggest attractions are the white tigers and white lions. They were absolutely beautiful animals but the fields in which they grew the fucks they gave to visitors were, and always had been, barren. Nevertheless, I did enjoy seeing these beautiful creatures. It was hilarious as well, hearing a father telling his daughter about how the male lion looked after all his “wives” and killed animals to feed them and the cubs. Er yeah, that’s right – not. I badly wanted to tell the poor girl that it is, in fact, the lionesses who do the hunting while the lions sit around looking pretty and having homosexual relations with he other lions when they’re not fighting for dominance. THAT would have opened her father’s eyes sure enough.

The blue bonnet you can see is that of a very unfortunate car that broke down in the middle of the white lion exposure. The family inside seemed very nice, if rather shaken, and definitely did not try to feed the lions. 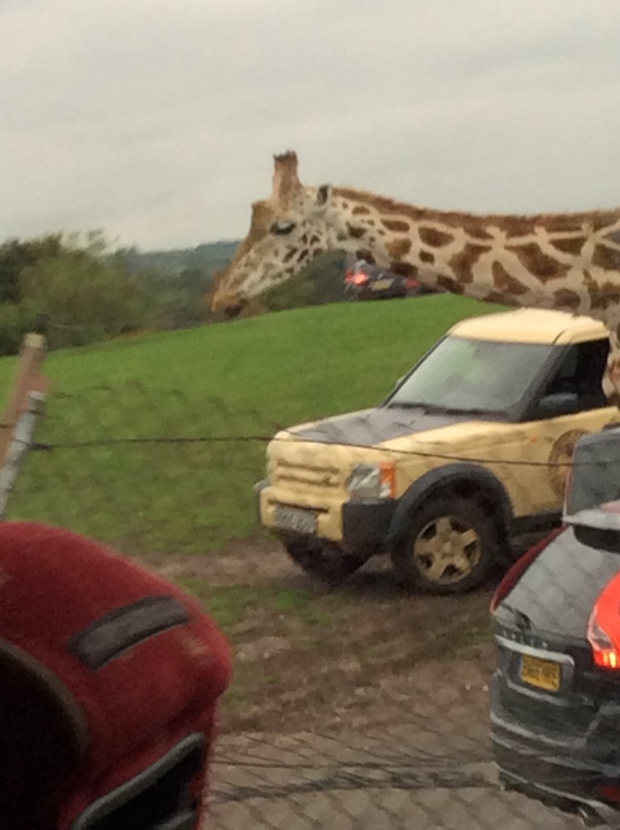 The giraffes were a complete hoot. They seemed really at home with humans, cars and all. They look a bit weird when they walk, ungainly, but they are the sweetest things and actually seem to be enjoying themselves. Sadly, by the time we got to where they were, they’d moved off so I never got any photographs of them playing, so this is the only snap I have,

The cheetahs were my second favorite (behnd the penguins) There were two enclosures, one on either side of the wooden fence and the cheetah’s form one side seemed to be talking to the others through the fence. Who knows, maybe they were. 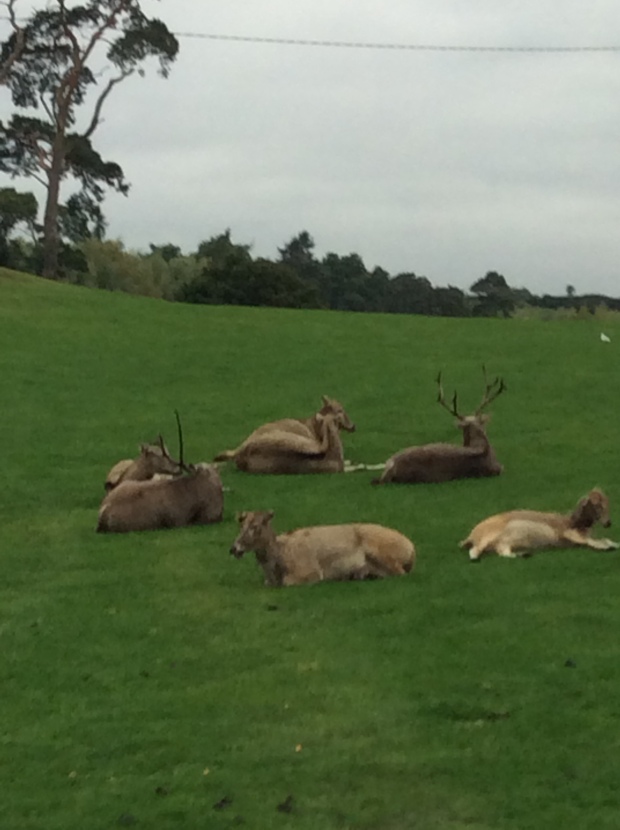 I wish I had a better picture of the stag. He was a magnificent beast, 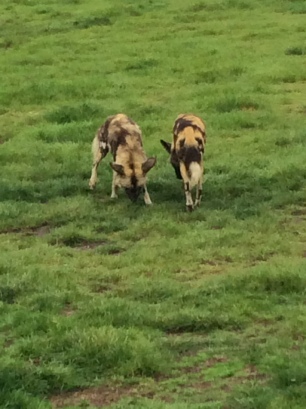 These are called “painted dogs”. I think they’re a kind of hyena and they’re super cool, I love them. 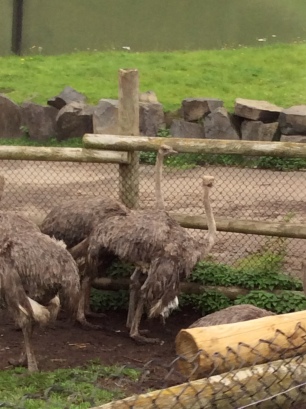 Last but not least, the ostriches and my personal favourites the penguins. Rather than photographs, I have videos of the penguins but I cant post them on here.

When we finally got out from the safari, we went into the part. Efan and Taylor went off to play and I can’t believe what they got up to. My boy who had never been on a fairground ride in his life (pretty much) got hooked and he turned into an adrenaline junkie. The very fact that Efan had such an amazing day with his friend made this the very best trip I have ever been on. I slept all the way home.