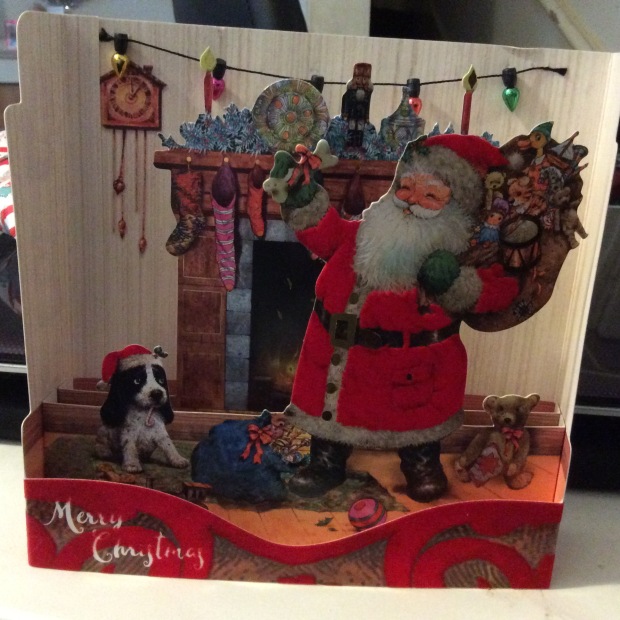 So, it’s over. All the hype, the stress, the rushing around. All the glitter and fakery and terrible films. All the smiles and “Merry Christmas”‘s. All the friends and family (well, they’re still there but let’s face it we only make the effort at Christmas).

I love Christmas. I mean really love everything about it. I love watching cheesy Christmas films, all the tinsel and glitter, even my least favourite jobs of writing cards and wrapping presents. It’s all part of the excitement, the sheer joy of living a little faster, a little brighter, a little more social.

And now it’s over.

I am sunk in the post Christmas melancholy that always starts a new year for me. Don’t get me wrong, I’m not unhappy or depressed, just a little sad, a little listless, a little wistful.

I’ve been very lucky in that all my Christmases so far have been good ones. There has always been enough of everything – presents, food, good company. My decorations are cherished and all hold pleasant memories. Even my cats sit and stare at them sometimes, without feeling the need to mess with them. Well, one of them did pee on the wrapping bag a year or two ago but I’m sure people didn’t mine their wrapping paper smelling slightly of cat urine.

The prospect of taking down the trimmings is a daunting one. There’s a lot of work involved and it’s not as rewarding as putting them up. Having said that, I will enjoy the memories as I pack and January is about the only time I ever feel my house is relatively uncluttered. That’s what comes of being someone with a lot of “stuff” in a tiny cottage.

I’m not a hoarder by any means (at least that’s what I tell myself) but when you add up the books, the witchy stuff and a seventeen-year-old son there’s not a flat surface in the house that isn’t crowded.

Looking back on this Christmas, I’ve had some lovely times. In the run-up we went Christmas shopping twice with friends (to Cwmbran and Chepstow, both of which pleasantly surprised me), visited Winter Wonderland (which was a complete bust for reasons), watched far too many cheesy films, and filled the house with beautiful things.

I even tried my hand at making some beautiful things as a craft project for a friend. 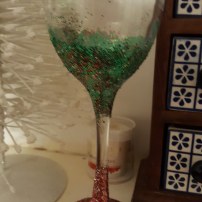 We spend Christmas Eve with my daughter and her housemate and had such a great time. We were royally spoiled with a feast that would have fed an army (to be technically correct it would have to be a really small one, who wouldn’t mind living for a while on a handful of Pringles and a sausage roll, but the point is there was more than enough for us).

We played Cards Against Humanity and Truth Bombs which turned out to be not as shocking as we thought it might. It seems we all know each other too well. We played the same game the following day and it didn’t turn out quite as well. (sorry Linda for starting the complaining thing).

On Christmas Eve we picked up my cousin’s son who stayed with us until Boxing Day. His mother joined us Christmas Day. What a brilliant Christmas Day! Not only did we have great company but my son cooked Christmas Dinner and it was spectacular.

Efan likes to cook. Mostly, he likes to bake but when he cooks his attention to detail has ensured there has been very little we’ve been unable to eat, if anything. For Christmas Dinner this year he decided, instead of the purely traditional he would make a “Winter Veil Feast” from his World of Warcraft Cookbook, followed by cinnamon and butterscotch pie inspired by the PC game, Undertale.

Think herby turkey cooked in cider with rough-chopped onion and…stuff. (I wasn’t allowed to interfere so don’t know the details. I do know that we bought more alcohol this Christmas than I have for years and most of it was for ingredients). Add apple and pear stuffing made with wholemeal bread, honeyed carrots, and the usual Christmas vegetables and you have an amazing feast. There was one slight hitch with the gravy, as I’ve never explained to him that in order to activate cornflower you have to heat the liquid, but fortunately we all like thick gravy.

The pie was to die for and we even had snow cookies later on in the day. None of us had any complaints I can assure you.

On Boxing Day, Efan enjoyed another Christmas with his father, and his step-family, and I spent an entire day eating crap and watching films on Efans mahoosive monitor that he’d brought down as we don’t have a television. Somehow my film watching developed a drag queen theme and I was introduced to Cherry Pop and Too Foo Wong and revisited an old favourite The Adventures of Priscilla Queen of the Desert. To keep my foot in reality I also watched Transamerica which I’d never heard of but absolutely adored.

My greatest regret about this Christmas is that I’ve been too ill to socialise as much as I planned and wanted. I’d planned to visit family I don’t see often, including my sister and niece, but I just wasn’t well enough. I’m still not. I think I’m going to have to stagger visits over the next couple of weeks. I’m so sick of being sick and good health absolutely tops the list of my hopes for 2018.

Later in the week, we had another fabulous day with our friends, and later still a cinema trip with my daughter to see The Greatest Showman. Man what a film. It’s old style musical at its best. Okay, it’s been pointed out that as a social commentry it’s wanting and the “freaks” could have been given a bigger role, but at the end of the day it was meant to be pure entertainment and what lessons it has to teach are secondary rather than of primary concern. I am unashamed and unapologetic to announce myself totally fangirl about the film.

This was my daughter’s “unicorn shake” from our dinner at TGI Fridays after the show. It was so amazing we had to photograph it for posterity. 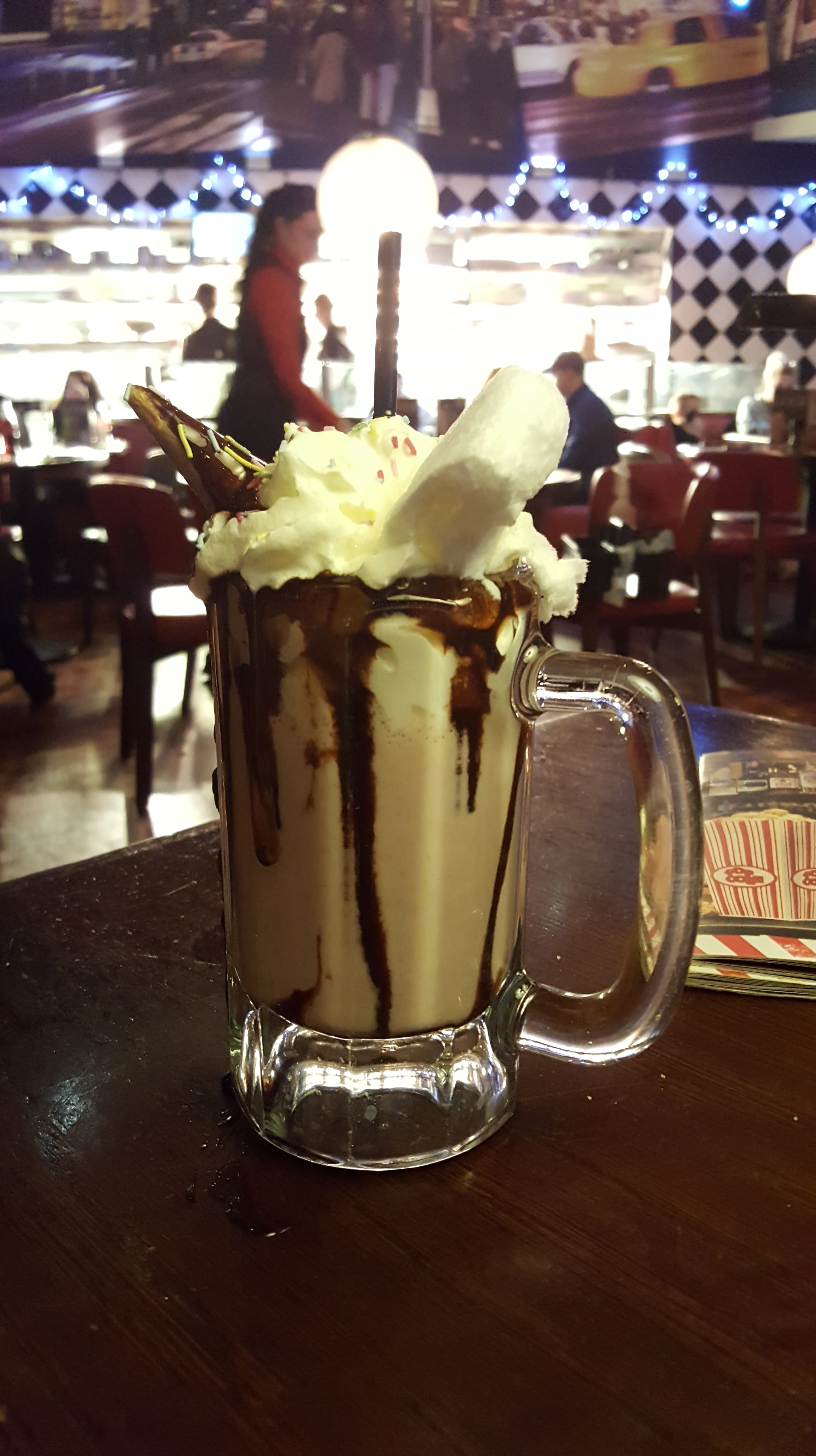 New Years Eve was spent with my ex and his new family, and given I really wasn’t in the party mood, we ended up having a brilliant time. I really struck lucky in that department. When my ex started seeing the lady who became his wife all I hoped for was that she would be good to my son, I never thought I was about to gain a whole new family. I’m forever thankful, especially as Stacey had promised to include me in the granny flat with her mother when I’m too old to take care of myself. Not that she has a granny flat yet but I’m still hopeful.

And now we’re back to reality, with only a few days left before it’s back to the normal grind of everyday life. I’m hiding in my bubble for just a few days longer with the prospect of a Lord of the Rings/Hobbit marathon still to look forward to.

So that’s about it for my stellar Christmas this year. As I wave goodbye to the sparkle and glitter, start thinking about taking down the trimmings and saving for next year, I can say bye bye and thanks for the time of my life.

Here’s to next year. There are only this many sleeps to Christmas.