I’m sure there are more of you out there who have never heard of Enochian than there are who know anything about it, or its “discoverers” John Dee and Edward Kelley. So here is a little something to educate and entertain 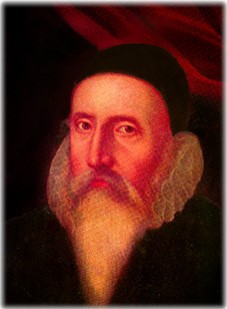 Highly respected mathematician and astronomer and leading expert in navigation.

Drew no distinction between scientific endeavour and occult endeavour.

One of his greatest works Monas Hieroglyphica was based on the Kabala and cantered around a glyph he’d created.

He needed an intermediary, a visionary or scryer who would be able to act as the link between himself and the angels and, after many unsuccessful attempts, met with Edward Kelley in 1592. Through Kelley the angels dictated a number of incredibly detailed books all though the Enochian language

I appears Dee sincerely believed these discoveries would lead to a healing of the rift between Catholic and Protestant and to discoveries that would benefit England, and mankind as a whole

In 1583 Dee and Kelley left for Poland and subsequently gained favour with the Polish king. In 1587 Dee and Kelley parted company and Dee returned to England where he found his home in ruins and his possessions decimated. He was unable to gain support from his peers or former political mentors and died in poverty.

He claimed the ability to summon and speak to angels in a scrying mirror owned by Dee, as well as various alchemical abilities including turning base metals to gold and producing the philosopher’s stone

About a year into his service with Dee he presented an alchemical book (The Book of Dunstan) and red powder supposedly from a supernatural creature, with which he claimed to be able to produce a paste which would transmute base metal to gold. He apparently demonstrated a number of times 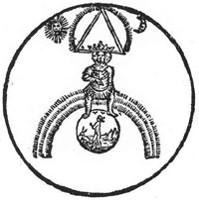 ´Neither Dee nor Kelley called the language Enochian, but Angelical. This was assigned later based on Dee’s claim that the biblical character Enoch was the last human to have spoken it. (In the book of Enoch, Enoch had a close association with angels and in late life was ascended to become the angel Metatron)

´According to Dee and Kelley Angelical was the language used by God to create the world. It was later used by Adam to name all things

´In 1583 the first text was ‘dictated’ – Liber Loagaeth (Book of Speech from God). The book consists of 49 great letter tables, or squares made of 49 by 49 letters (however, each table has a front and back side—making 98 49×49 tables in all. The angels did not provide an English translation

´The other set of Enochian texts was received by Kelley a year later for which an English translation was provided.

´The texts comprise 48 poetic verses, which in Dee’s manuscripts are called “Claves Angelicae”, or “Angelic Keys”. The Keys are assigned certain functions within the magical system. Dee was apparently intending to use these Keys to “open the 49 Gates of Wisdom/Understanding” represented by the 49 magic squares in Liber Loagaeth:

Although Dee and Kelley’s work attracted a lot of attention, little was done with it from a magical perspective until the nineteenth century when it was rediscovered by Samuel Liddell MacGregor Mather of the Hermetic Order of the Golden Dawn in the 1880s.

Mathers created a comprehensive magical system based on the work of Dee and Kelley. However, the main body of the work is based on only one of Dee’s diaries and the planetary, elemental and zodiacal elements are not based on their work

The major popularity of Enochian as a magical system didn’t come until Alistair Crowley took up the banner in the 1920’s. His work first appeared in his published journal and he went on to publish a number of pamphlets, books and recordings on the subject

Crowley’s first work “Liber Chanokh” basically set outthe Golden Dawn’s understanding of the subject but later works, such as “The Vision and the Voice” are based on his own work and visions.

Later occultists have gone back to study a wider range of Enochian texts, including more of Dee and Kelley’s original works and have developed a more detailed and balanced system

I hope you enjoyed the post. I think next time, I’ll take a look at how black cats got their bad rep

Forget Winnetou! Going Beyond Native Stereotypes in Germany is an upcoming documentary film by Timo Kiesel (glokal e.V.) and Red Haircrow. It is currently in production, and will combine live-action scenes, interviews and news clips with graphics and short animated sequences. Here’s a short teaser, with official trailer coming in December. Tagline: “Reeducating the Resistant”.

Growing up in Germany, Timo’s world view as a kid was highly influenced by his reading of more than 60 Karl May volumes. Timo was fascinated by and liked to dress up as native. Questions of stereotyping and cultural appropriation are still viral to him today, and not only because his own kids are confronted with racist imaginary of natives in kindergarten, media and the German public. Today, Timo holds an MA in Postcolonial Studies (Goldsmith’s College, London) and works as a trainer and consultant in the context of anti-racism and…

With Samhain (Halloween) approaching, I thought I might write some posts on “witchy” themes.

Some time ago I prepared and delivered a Power Point presentation on divination to our writing group and I though, because I’m lazy that I would start with this as it’s already written (kind of, since I can’t transfer the information from the Power Point to here and have to re-type it)

Divination Meaning: From the Latin Divinare “to foresee; to be inspired by a god”

There are too many types of Divination to consider them all in detail. They include

´an occurrence or phenomenon believed to portend a future event

´The art of reading omens is called augury

´Or deliberate such as examining entrails of a sacrificed chicken

´Prophecies may be spontaneous or derived from other methods of divination 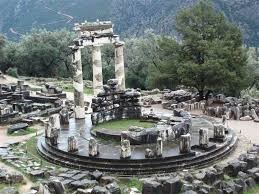 ´The most prestigious and therefore the most well documented oracle. One of the most powerful women in the ancient world

´Could be noble born or peasant. Would give up her identity on becoming the Pythia

´Performed before a battle

´Hiera – at the campground. Seers would slaughter a sheep and consult its innards

´The art of scrying involves auto induced trance by distracting the mind with things such as a flickering flame, flaws in a crystal, refracting light etc to allow the inner eye to ‘see’ images on a reflective surface such as a black mirror, polished obsidian, crystal ball, cup of coffee.

´Always use the dominant hand

´Lines change over time. Photocopy hand every six months to map the changes

´The minor arcana similar to playing cards except extra picture card, the knave

´Placing of natural or man made structures

´Throwing handfuls of Earth or sand

´Simple – such as assigning a character number through birth date

Can be selected individually, cast, used as totems, charms or complete charting systems

I hope you enjoyed our peep into the world of Divination. Next time, I’ll talk about Enochian Magick then maybe we’ll look at witches and black cats, the history of Halloween and the nature of the festival of Samhain itself.

When I moved into this house, two years ago, my enormous corner unit wouldn’t fit in one piece, so we split it. Part went in Efan’s half of the room. Here it is before it became his pit. Didn’t it look nice in those days? 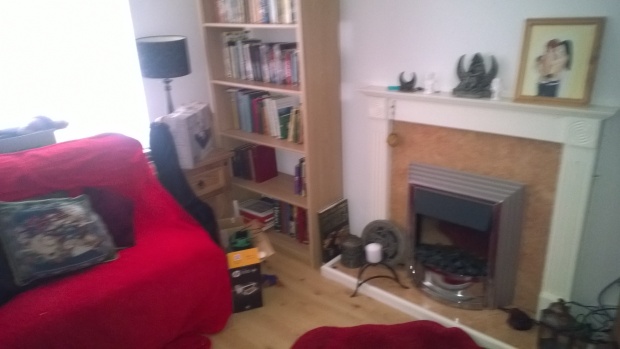 And part went over my side, where it took up almost a whole wall. For some reason, I don’t have a photograph that doesn’t have a boy sprawled all over it, usually with skin showing and an animal perched on top.

About a year after moving in, the red throw was wrecked, all the pillows ha gone missing, and the dog 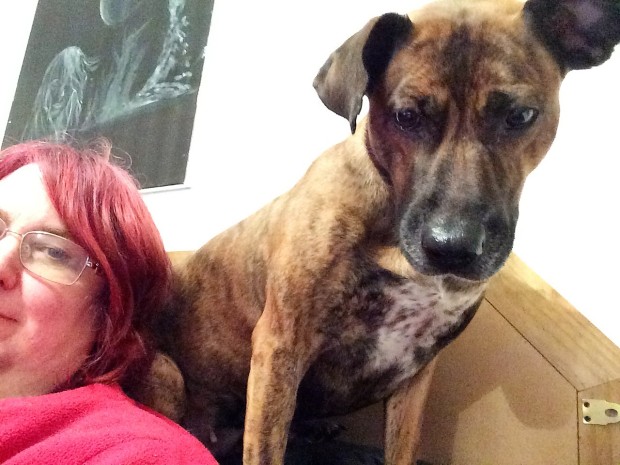 had decided it would be a good idea to bury a bone in the middle of Efan’s part of the sofa. Hence a huge hole and a room full of foam. We used to joke that one day we’d come home and find Bella lost somewhere inside the sofa. Thank goodness that never happened.

On my side of the room, the sofa sagged and bent, and the last straw came when the recliner popped out and wouldn’t go back.

One day, on impulse, I went to recycling center and bought two new sofas. Well, they were new to me, okay.

On returning home, a sad truth confronted me – what the hell were we going to do with the old furniture?

Numerous calls to “The man with the van” taught me that for professionals to take furniture to the recycling center they have to have a license and no one in the Rhondda (or so it seems) have a license.Not only that, but the first date the local authority could come and collect was 14 October.

So we were stuck with furniture we couldn’t get rid of while about to take possession of more. Great.

No problem, we thought, we can store the furniture in the garden until the council can collect. Therefore, Efan and I maneuvered one third of a sofa into the kitchen, then into the back hall – but not out of the back door. We tried all ways, but it just wasn’t going. Then my back went into spasm and all hope was lost.

Tears and tantrums ensued – that was just me – and Efan had a meltdown. After a difficult week it was the straw that might not have broken the camel’s back, but certainly screwed it up for a few days.

An impassioned appeal on  Facebook reminded me why I don’t ask for help, and the situation could have descended into a full scale pity-party, without cake or sausage rolls.

A chance phone call from my cousin provided our salvation and my knights in shining armour hastened all speed from the big city. Who knew that if you slit a padded sofa with a scalpel the padding comes out and the carcass fits through doors that would otherwise not have accommodated it?

Two wooden carcasses and a car full of foam-filler black bags later, and a takeaway was called for.

We left the corner piece for me to sit on until the new furniture came, on the basis that if we could get the big bits out, the corner bit should be easy, right?

Um. It turns out that the corner but has a curved back and our education in furniture removal was increased yet again with the eye-opening fact that curved things don’t fit through doors as well as straight things.

We un-stuffed, hammered, chiseled and had another breakdown but to no avail, and we are now left with a deadly (because of blood-seeking nails) but interestingly rocking wedge of wood in my kitchen.

I have to give it points for tenacity, but it will not defeat me. The bags will go to the recycling center today and the rest will be smashed with a sledge hammer as soon as I get hold of one. Injuries aside, I’m sure I will find the experience extremely rewarding given the trouble this little piece of hell has given us.