A friend recently introduced me to the art of genealogy, and of course it’s become an obsession. Thanks to Ancestry.co.uk and Find My Past I’ve discovered a lot, not only about my family history, but the history of the valley where I live. The above photograph is the main street of my town in around 1910. The building on the right with the white columns is Barclays Bank which is the first place I worked after leaving school. It’s now a children’s day care center.

Although there is evidence of occupation in the Rhondda since Neolithic times, and there is plenty of evidence for settlements throughout subsequent history, with an Iron Age hillfort, medieval earthworks, two castles and even an abbey.

Until the sixteenth century Penrhys, on a mountain overlooking where I live, was one of the holiest places for Catholic pilgrims in Wales. This was due mainly to the Holy Well. The well was originally a spring, sacred to the goddess Brigid, who is responsible for holy wells generally and healing in particular.

There is a legend that, at some point, a statue of the Virgin Mary appeared in a tree beside the well. No one was able to take it out of the tree until a building was erected to house it, so a little chapel was built where the statue was housed until 1538 when, during the dissolution of the monasteries it was taken to London and the chapter burned to the ground.

Near the chapel, higher up the mountain was a monastery which included a dormitory for travelling pilgrims. Although not technically a monastery in its own right, but a manor of the Cistercian abbey in Llantarnam, it became very prosperous, probably due to this enterprise.

It wasn’t until the discovery of coal during the industrial revolution that Rhondda really took of though. In 1801 it had a population of under 1000 people, by 1901 that had risen to over 100,000 with immigrants from all over Wales, the south of England and even Italy. There are still a fair number of Italian cafes and fish and chip shops scattered around. Italian ice cream is a particular favourite.

It seems as if most of my family come from either mid Wales or Somerset, its members migrating to the Rhondda during the heyday of the mining industry. The Somerset contingent were both coal and tin miners, while the Welsh contingent were farmers. One of my relatives by marriage was a warden at Brixham Prison in London, but by and large once we arrived in Rhondda we stayed here. From the start of coal mining in Rhondda to the very end, my family were miners.

Contemporaneous reports compare the Rhondda to a “wild west” town, with mud streets and a godless population. Houses were cramped and close together with its characteristic terraces of miners’ cottages, one of which I live in today.

In the mid-eighteenth century a cholera epidemic swept through South Wales. The cramped and dirty conditions were an ideal breeding ground for the terrible disease. During the worst outbreak in 1842 over 50,000 people in England and Wales died. 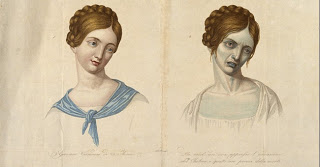 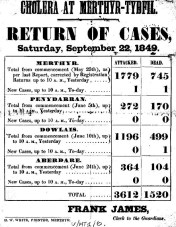 The cholera epidemic was followed by a breakout of smallpox, so severe a separate isolation hospital was built in Penrhys in 1907.

Another illness which badly affected the valleys was influenza of which my great grandfather died in 1901.

My great-grandfather, John James Hughes is the one in the center, with my grandfather, John Robert Evans is the good looking on to his right (our left). All of the men in this photograph were miners.

One of the major causes of death among young men in Rhondda was coal mining accidents. The Senghenedd disaster in October 1913 killed over 400 men and wiped out families leaving women and children destitute. 60 victims were under 20 years old with some as young as 14.

Due to the dreadful conditions of the “wild west” and the godless nature of the miners (although I suspect much had to do with encouraging the miners to work harder and suffer the conditions with a better grace) the valleys were ripe for evangelism and there were two “great” revivals, one in 1869 and a bigger one in 1904.

In the run up to the great revival my great grandmother’s brother, David Leyshon,  became an evangelist and in the late 1800’s, he travelled to Lancashire where, in the 1901 census his occupation is listed as “evangelist”. He returned to the Rhondda in 1904 after the tragic death, in a mining accident” of his brother William (23 years old). His wife, Annie, remained in Lancashire where their daughter was born in 1906. In the 1911 census, Annie was living alone with the children in Lancashire.

My father started work in the mines at 14. He’d been successful in obtaining an apprenticeship as a car mechanic but the family needed his income. As apprenticeships were unpaid he had no alternative but to turn to mining. He retained his love of cars all his life and spent a lot of time under the bonnet of a car, not always successfully to my mother’s annoyance.

And then there was me